The construction of the Aqualand complex was preceded by the so far most extensive archaeological rescue excavation in Mušov. On a total area of 5 hectares, among others, also a 120 m long segment of a double line of ditches was documented, representing the south-western part of fortification of the Roman fortress on Hradisko. The easterly situated internal ditch had the largest measured width of as much as 6.6 m and depth of 4.2 m; the external ditch had the maximum width of 4.6 m and depth of 3.2 m. Its course has distinctly deepened our knowledge of the extent of the fortified area on Hradisko, which evidently also comprised a part of the adjacent area of what is now the caravan site. Also discovered were the foundations of two wooden towers, which consisted of large postholes arranged to form a square layout with an area of ca. 4 x 4 m. Here also was situated one of the two hitherto unearthed gates to the area of the Roman encampment on Hradisko. 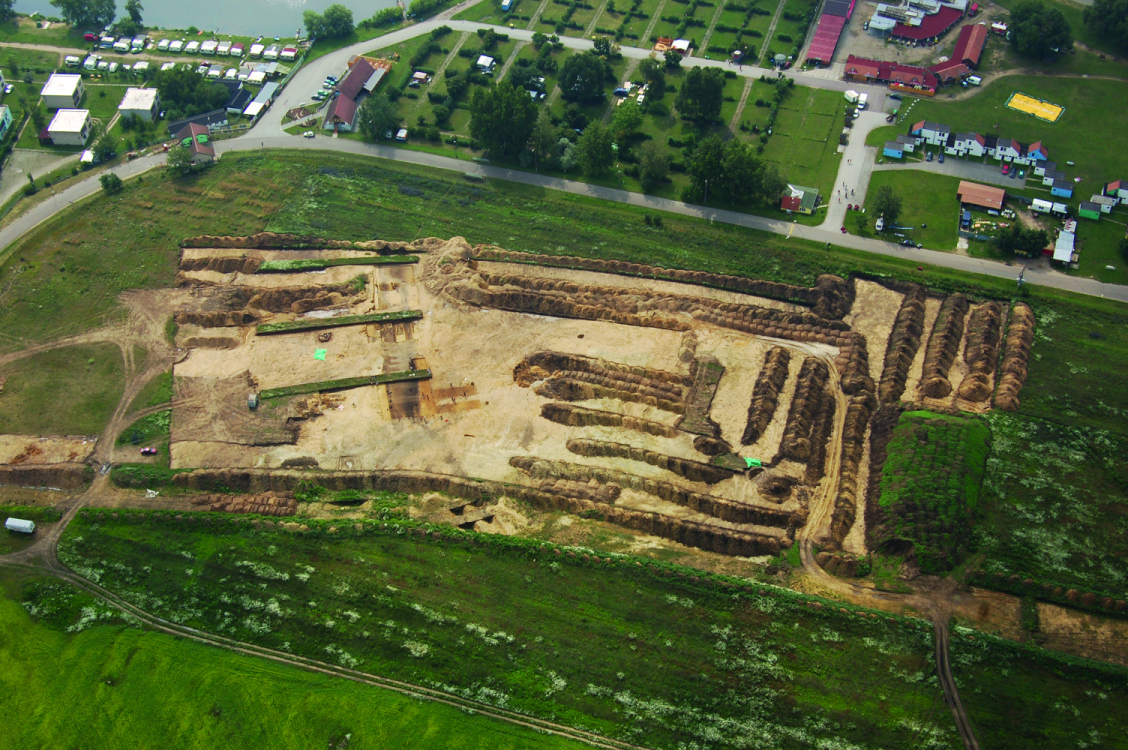 Archaeological excavation in the area of what is now the water park.

A so far entirely unique find was made inside the fortified area. In a small oblong pit rested a completely preserved human skeleton. The body was laid on its left side with slightly bent knees. Under the left elbow there was a Roman bronze ‘knee’ brooch, the only artefact recovered from the backfill of the pit. The brooch represents the most widespread form of clothing clasp in features of the Roman army from the second half of the 2nd century AD, inclusive of Hradisko. Based on formal attributes, it probably was not a ritual burial observing common customs of that time (the Romans have buried their dead and deposited the cremated remains in urns). According to anthropological determination, the skeletal remains belonged to a male aged 20 to 25 years, of medium robust stature around 170 cm tall, without any distinct traces of illnesses or injuries, with only a healed fracture of the left radial bone.

The cause of death, however, cannot be determined. From the bone a sample was taken for radiocarbon dating, which has revealed that the burial has taken place sometime between the years 130 and 210 AD. The teeth preserved did not exhibit neither caries nor tartar. Judging from a thin section of teeth, the male died at the turn between April and May. In the last 7 to 10 years of life, his diet was dominated by cereals and vegetables at the expense of meat. The analyses of DNA and strontium isotopes indicate that the man may have come from the Mediterranean area (Italy, Egypt, Iberian Peninsula). Provided that this conclusion is right, it would be the first identifiable human from the territory of the Roman Empire in Moravia.

Where the Romans have buried those who died during their presence on our territory is not yet known. However, for hygienic reasons it was certainly always beyond the walls of camps and cities. So it seems that this male must have been laid (or tossed) into the grave pit at a time when the nearby defensive walls and the military hospital were no longer in use. It may have been somebody who for some reason (e.g. serious disease, desertion, etc.) did not return with the army in AD 180. That might be why he was not buried in a proper ritual manner. 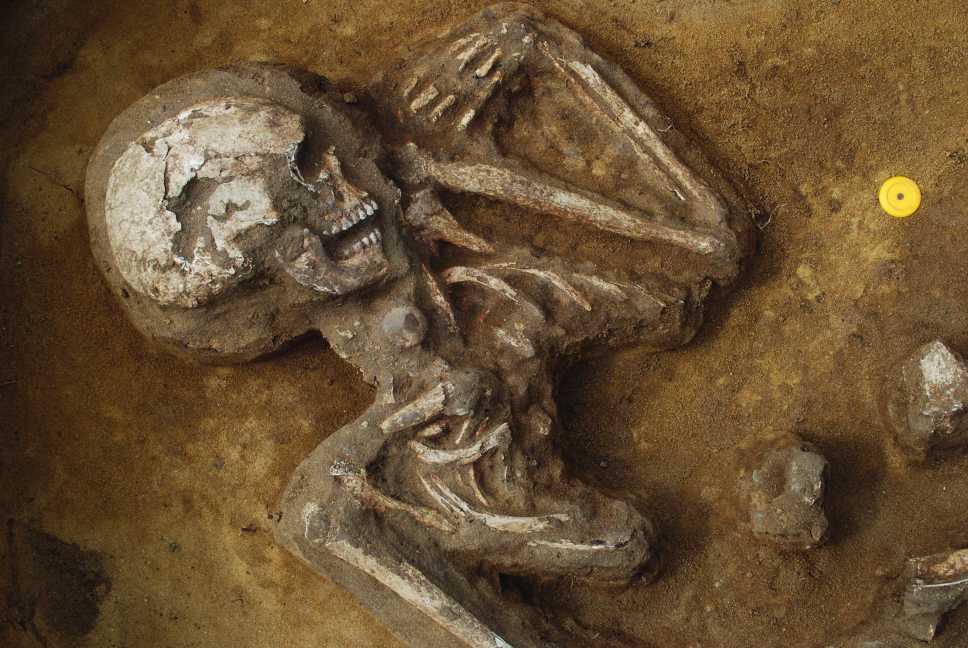 A male skeleton deposited in a shallow pit nearby the Roman defensive walls.

During the most of the Roman Era, cremation burials have been practised on a large scale by both the Romans and the Germans. This fact sets considerable limits to any more extensive anthropological analyses of the appearance, state of health and other aspects of the then human communities. However, modern science is able to draw many conclusions from even fragmentary, burnt bones. On the territory of European provinces of Rome until the end of the 3rd century AD, burnt bodies were only laid into graves in the case of newborns and infants until the 6th month of life, or adults, whose way of life or death did not allow ritual cremation. 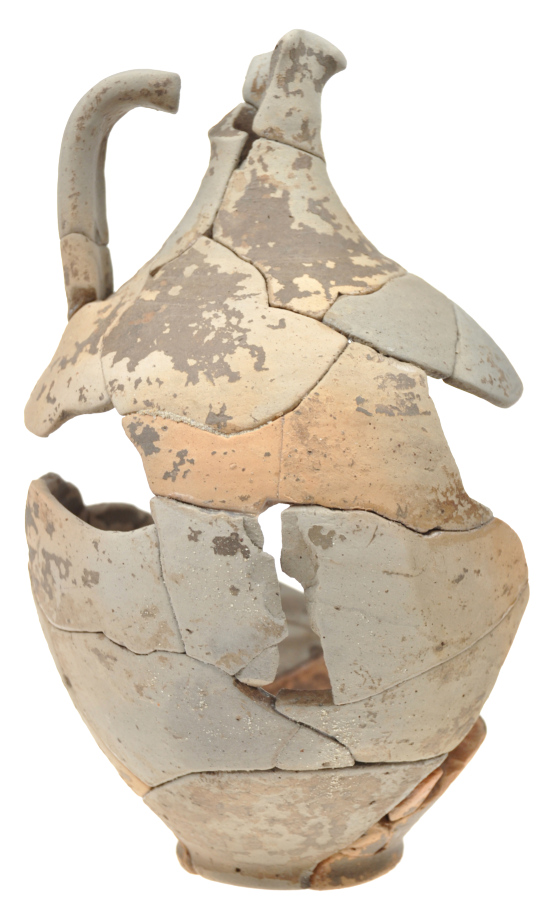 A ceramic jug made on the territory of the Roman Empire, discovered in one of the ditche.

The appearance of inhabitants of the Roman Empire was also distinctly influenced by their ethnical variety and considerable mobility. People from Italy as well as from other parts of the Empire have moved to provinces above all for the purpose of military service, but also trade. On the territory of the adjacent province of Pannonia in present-day Hungary, evidence is known, for example, of immigrants from Syria, Egypt, Hispania, North Italy or Britannia. This also was the case with the other provinces. 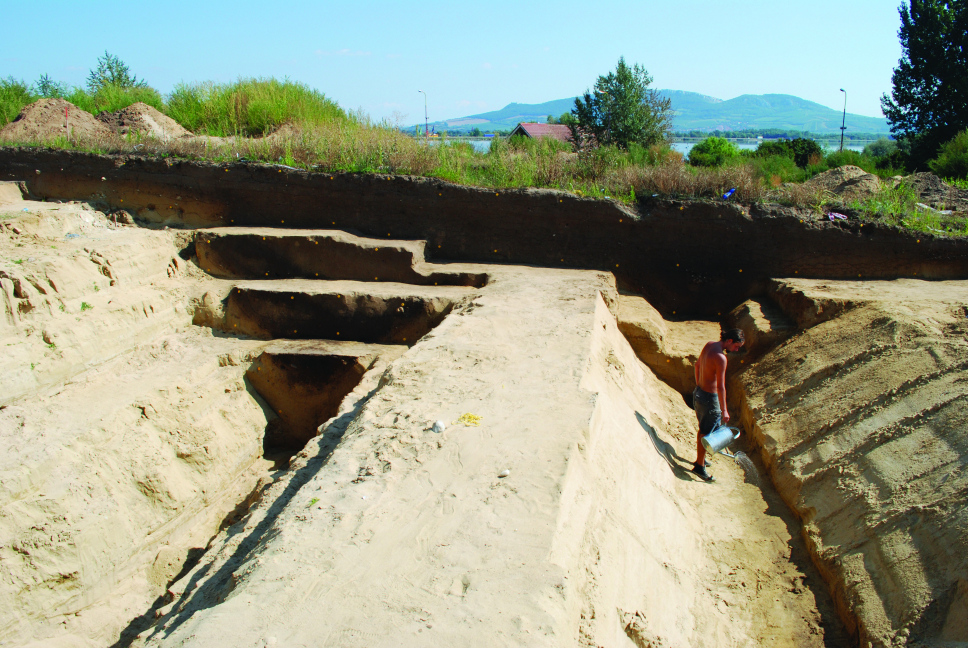 Excavation of a double line of Roman ditches.

More detailed anthropological analyses carried out in Southwest Germany have helped to estimate the average height of males of the Roman Era to 170 cm and females to 159 cm. In the previous Celtic Period, this value was determined to 171 or 161 cm respectively (today it is 178 and 166 cm). The decrease in height in comparison to the previous era has been explained as a result of immigration from the southern parts of Europe. The values of expected life length (in males of that time around 36 and in females 33 years), on the other hand, are higher than with the preceding Celtic population (but the high mortality of children around 30 % remained unchanged).