The Roman Empire reached its largest spatial extent in the second century AD. Its frontiers on the Danube and Rhine divided the European continent into two different worlds. On the one side there was the most developed and most powerful ancient state with its legendary invincible army and wealthy provinces in Europe, Asia and Africa. On the other side lived the initially scattered, economically and politically not very powerful Germanic tribes, whom the Romans referred to as the Barbarians. Our territory at that time has been occupied by one of these peoples, namely the Marcomanni. The entire Roman Era (1st–4th cent. AD) was characterised by a varied spectrum of contacts between the Germanic tribes and the Roman Empire in Central Europe. They mostly included neighbourly, trading and diplomatic relations. The frontiers of the Empire were not impassable; the Germans have visited the markets in Roman cities and Roman merchants have penetrated the barbarian territory on the well-known routes. The Romans have constantly tried to influence the domestic political affairs of the Germans by means of diplomacy but, of course, from the position of power. These relations were sometimes disturbed by major military conflicts which, however, often signified a fundamental turning point in mutual relationships. 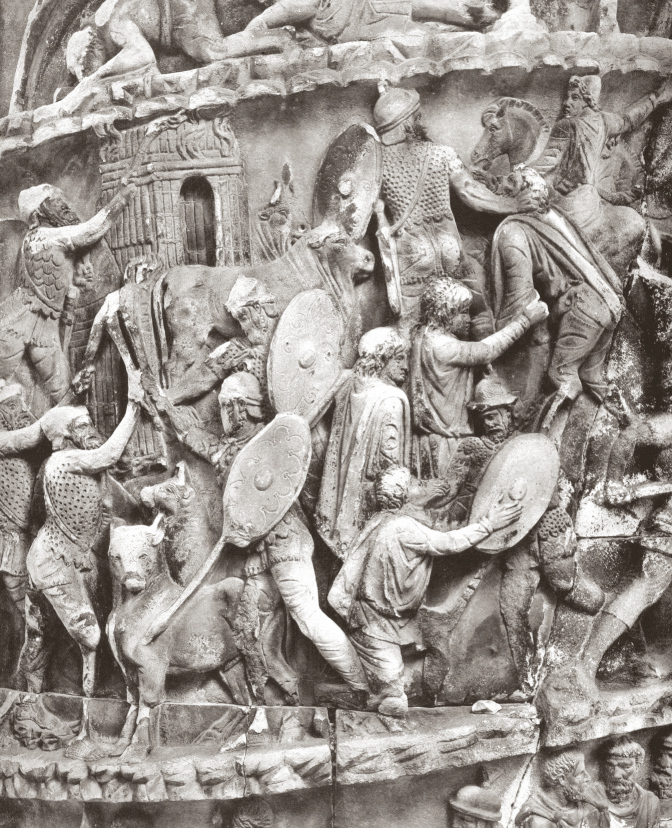 Fortification of a camp on the enemy territory during the Marcomannic Wars (depiction on the Column of Marcus Aurelius in Rome).

Researchers from the Institute of Archaeology of the Czech Academy of Sciences in Brno have long been concerned with unearthing the relics left behind by the Roman army on the territory of what is now South Moravia. Their excavations have gradually proved that the most distinctive evidence of the famous Roman legions are found below the ground surface on cadastral territory of the already defunct village of Mušov, particularly on the top and on the slopes of the hill called Hradisko – just in places where you are standing now. The most part of the area of Hradisko was not yet explored, but it can already be said with certainty that the Roman army has built here repeatedly its military camps during the 1st and 2nd centuries AD. This happened in a time when trading and political contacts were superseded by military conflicts. The most detailed knowledge and the largest volume of archaeological evidence are so far known of a major military conflict from the time of Emperor Marcus Aurelius – the so‑called Marcomannic Wars (166–180 AD).

After the initial Germanic attacks, the Roman army started its offensive operations and in AD 172–180 seized the southern and central parts of what is now Moravia. At that time an extensive fortified command base was built on Hradisko. Towards the end of the Wars, the whole Marcomannic territory has been occupied by Roman legions and Marcus Aurelius probably intended to annex it permanently to the Roman Empire. However, in the beginning of AD 180 the sudden death of the Emperor and a new foreign political strategy of his successor Commodus signified the end of this period and return of the Roman army beyond the pre-war borderline on the Danube. Yet it is true that the Marcomannic Wars have made our territory for a short time the scene of particularly significant historic events. That is why the archaeological relics from this period count among the most important cultural values in the Czech Republic and represent an integral part of the European cultural heritage. 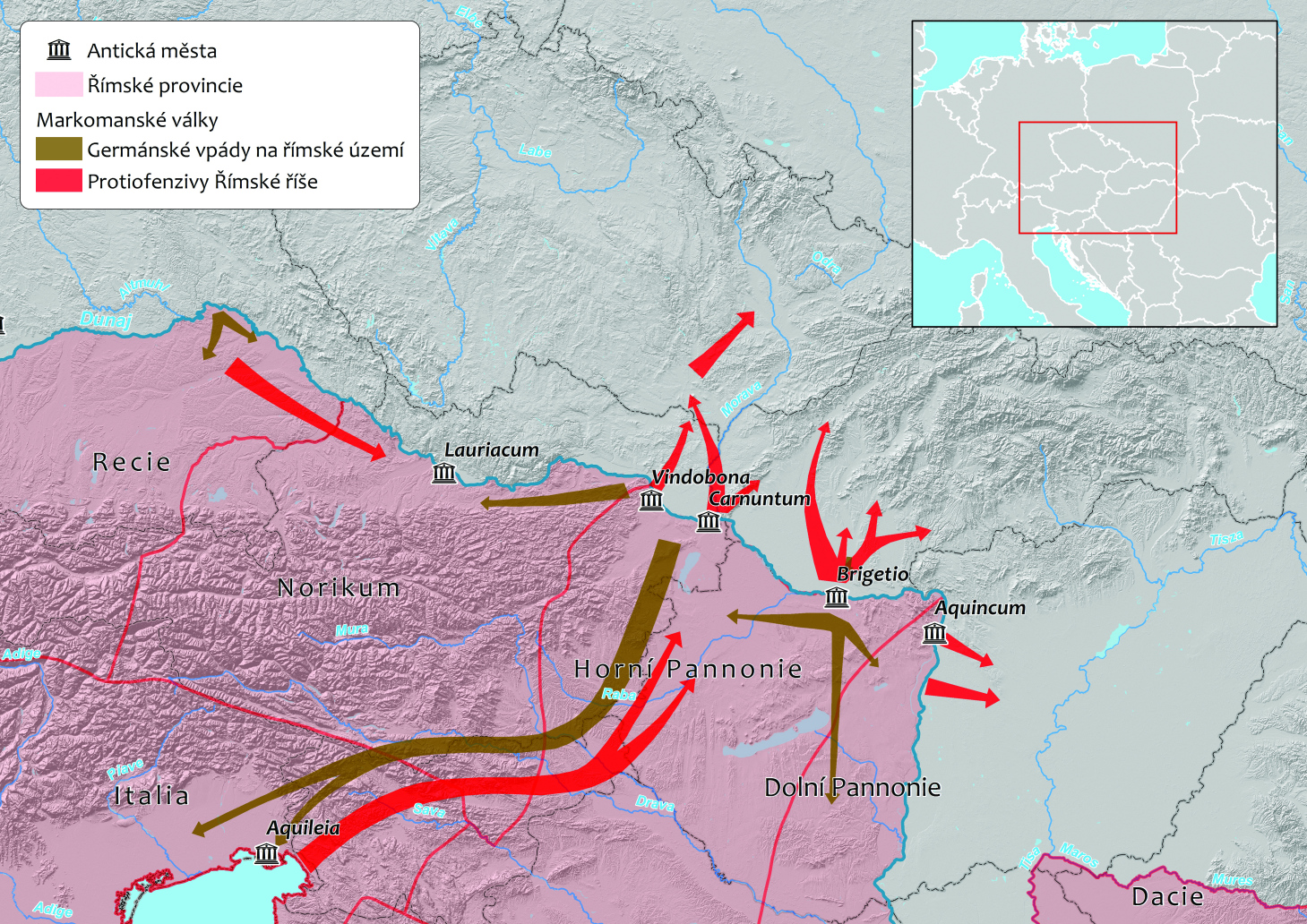 The main directions of military operations during the Marcomannic Wars.

The excavations at Hradisko

The earliest Roman finds from Hradisko were already discovered in the 17th century, and the 18th century historian F. J. Schwoy even claimed that a Roman city has been standing on this place. The first systematic archaeological research did not start here until 1925. The excavations in 1926–1928 were conducted by a German-speaking archaeologist from Prague, Anton Gnirs, whose research activities have been supported by the office of the then Czechoslovak President T. G. Masaryk. The modern tradition of archaeological excavations on Hradisko was established by Jaroslav Tejral in 1984. His discoveries represented a breakthrough in the knowledge of this site and revealed its all-European significance. Since then, research into the Roman military facility has been conducted by the Institute of Archaeology of the Czech Academy of Sciences in Brno, one of the pillars of archaeological research in our land.