The view which opens in front of us not only in this place, but in all places on the top of Hradisko, clearly shows how significant the strategic location of the hill has been in the past. The territory of the Dyje – Svratka Valley and the Lower Morava Valley has already since the early prehistoric times been densely occupied and used for agriculture. Long-time archaeological excavations as well as chance finds give proof that this also was the case with the Roman Period (1st–4th cent. AD), when the Germanic tribe of the Marcomanni has settled down in this area. Their power centre, where the tribal elite and the warrior troops have lived, was situated in the area of Mušov and the present-day Nové Mlýny reservoirs. The presence of the highest social classes was one of the reasons why Roman military engineers have chosen this place for the build-up of a central fortress. Equally important, however, was the question of accessibility on the main travel routes which have been used at that time. 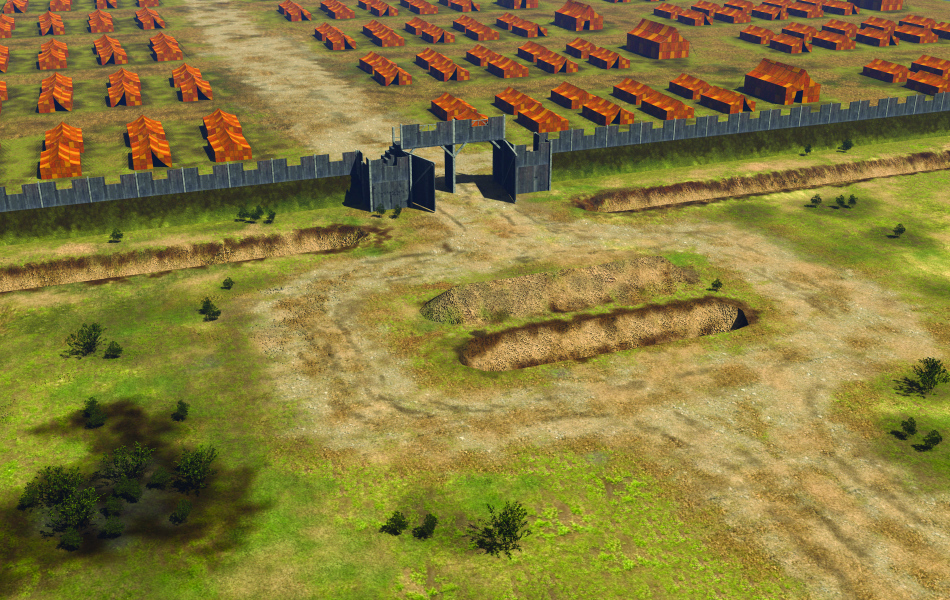 3D-visualisation of a temporary camp.

Nevertheless, in order to understand the strategic plans of the Roman army on an enemy territory it is inevitable to gain knowledge of other military features as well. Among them are, for example, the so-called temporary camps, of which around 30 are known in the Middle Danube region. They are situated at regular distances from each other (approximately a one‑day walk of 15 to 20 km) along the lower reaches of the Morava and Dyje Rivers. The most of them are concentrated in the neighbourhood of the central fortress on Hradisko. The first temporary camps in Moravia were discovered on the cadastral territory of Mušov, 2.4 km to the south of Hradisko, in the tract of land Na Pískách on the southern bank of the river Dyje. The northerly situated camps, for example those on the territory of Modřice near Brno, Olomouc or Hulín, parallel the borders of the then Germanic settlement area on our territory. These field camps, depending on their dimensions, have temporarily accommodated larger or smaller military units. Their fortification resembles that on Hradisko, but inside the fortified area there only were tents. Stray finds of typical components of equipment and weapons indicate some hitherto unspecified features and movements of the army. 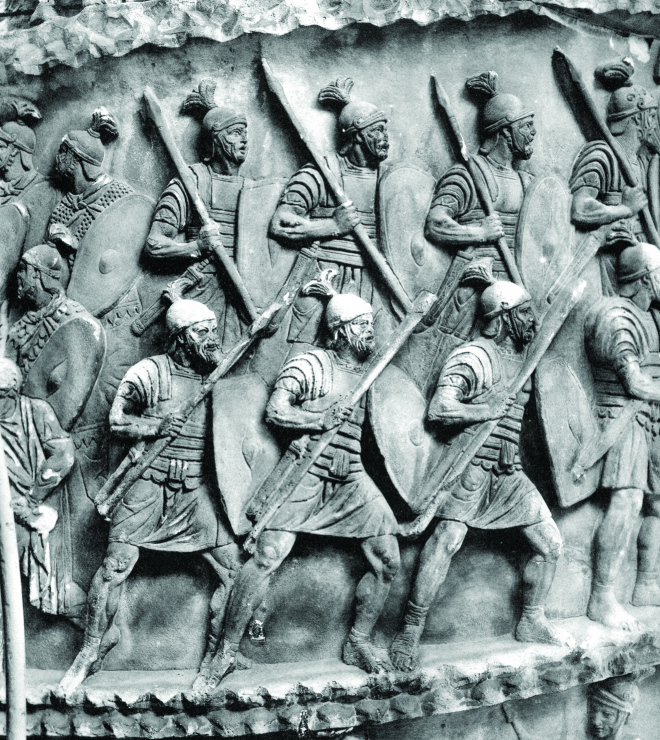 A march of Roman legionaries, as depicted on the Column of Marcus Aurelius in Rome.

The strategy of Roman military command during occupation of an enemy territory included several basic tools. The deployment of troops must logically have taken into consideration the control over the most densely settled regions and the main roads. Of fundamental importance was the control over the key route leading from the provincial territory along the Morava and Dyje Rivers, which has also played the crucial role in necessary supply. In the Roman Period north of the Danube did not exist any stable road network comparable to the Roman territory, so the transport of a large volume of supplies and military stuff has preferably taken place on the rivers. 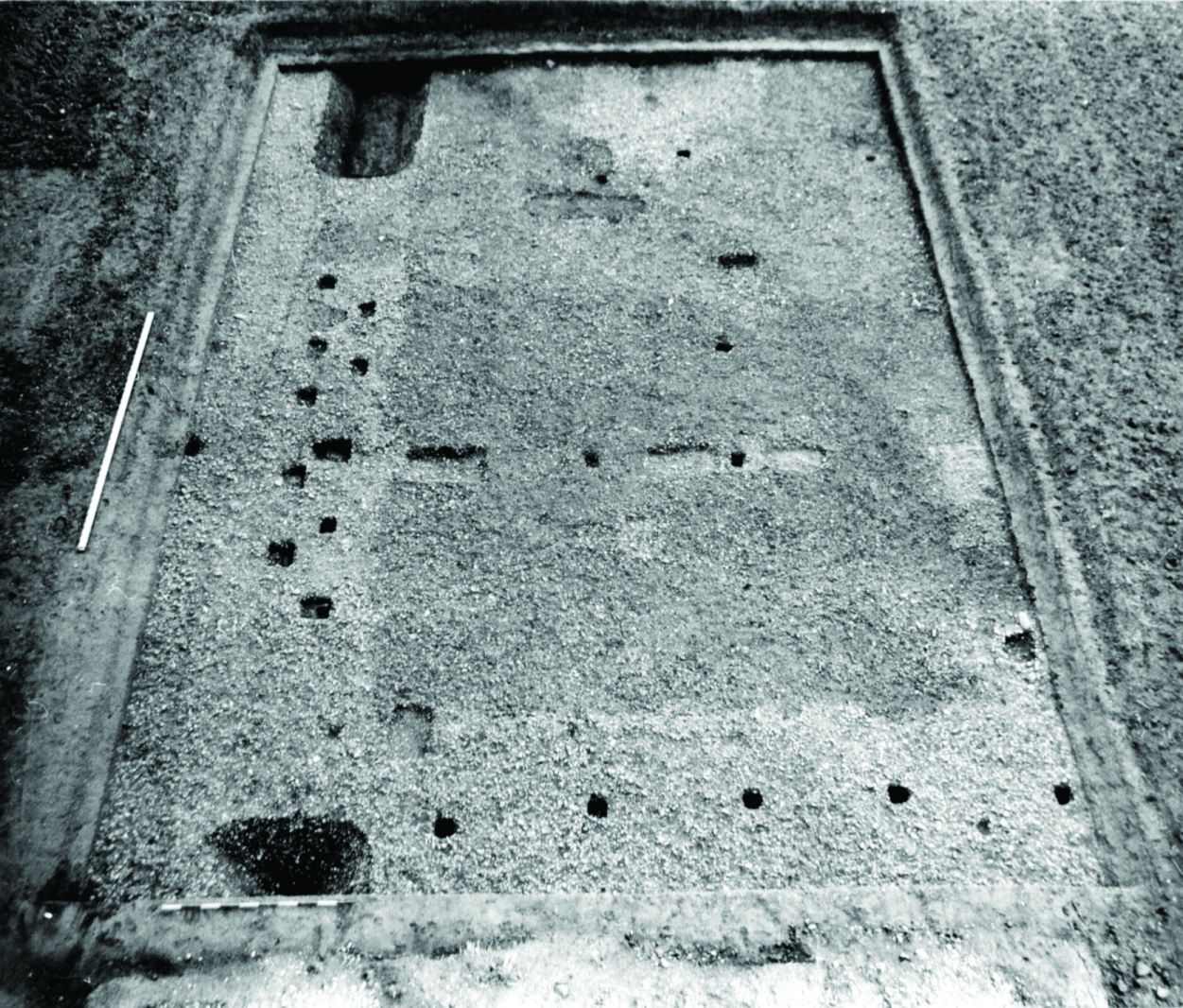 That is why numerous camps are situated in the neighbourhood of important watercourses within the region. These camps have secured a safe use of rivers and overland roads leading along them, and provided anchorage grounds for transport vessels. They were distributed so that between them existed a sort of visual communication such as, for example, fire, smoke signals or even mirrors, as it is mentioned in ancient literary sources. The possibilities of visual control and signalisation systems were probably also used with the lowland-like, yet quite corrugated area of the Morava valleys. Important hilltop locations, not only Hradisko itself, but also, for example, the Pálava Hills, played a key role in this system.

The building of camps, even though for a very short time only, is a typical attribute of Roman military strategy. A late antique military manual, whose author is Flavius Vegetius Renatus, wrote about camps:

“The camp shall be always – all the more in the neighbourhood of the enemy – on a safe place, so that at the same time it is also provided with sufficient amount of wood, fodder and water. The place also must be healthy, especially when a long-term stay is on the plan. It is necessary to avoid that the camp is located below some nearby hill or mountain, because from such location might arise damage if these elevated places would be seized by the enemy. It is also necessary to find out whether the flatland is flooded by streams, to avoid any disaster for the army. As far as the extent of the camp is concerned, the camp is built according to the number of soldiers and the volume of luggage, so that many soldiers are not crowded in a small area, and a small troop is not scattered more than necessary within a too extensive camp.”

The dimensions of the so-called temporary camps identified on the Germanic territory north of the Danube are considerably varied. The smallest among them take an area of about 1.2 hectares, whereas the largest ones reach 42 hectares (the camp in Charvátská Nová Ves or one of the camps in the tract of land Mušov – Na Pískách). It is evident that the largest camps may have even accommodated two entire legions with accompaniment at the same time, whereas the garrison of smaller camps only comprised two – three hundred men.

Spacious temporary camps with many thousands of soldiers were probably intended for a short-time concentration of large tactical forces composed of various types of military units. The soldiers garrisoned in smaller camps have probably supervised the anchorage grounds, fords or overland road junctions. The above-mentioned author of the military manual adds: “No matter if the troops are garrisoned in a camp or in a city, the commander must be particularly mindful that the pastures for animals, import of grain and other supplies, water, wood, fodder, simply everything what the army needs, is protected from the attacks of enemies. This, however, can only be secured by deploying defensive garrisons in suitable places near the roads, on which the supply of our army will be taking place.”